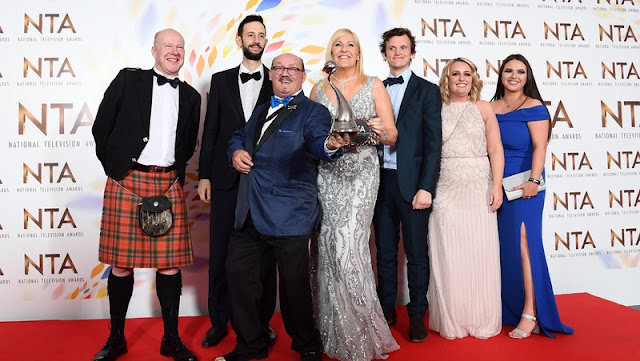 Brendan O’Carroll and the Mrs Brown’s Boys team recently celebrated winning Best Comedy at the UK’s National Television Awards
Brendan O’Carroll has told RTÉ Radio 1’s The Ray D’Arcy Show that the cast of Mrs Brown’s Boys will join him in his new comedy series about Irish peacekeepers in Lebanon, Lebanese Outpost.
The Mrs Brown’s Boys creator and his co-star and wife Jennifer Gibney were guests on RTÉ Radio 1 during the week, when talk turned to their new series.
O’Carroll told the host that he is finalising plans for the filming of the pilot episode of the show, which will be closer in spirit to M*A*S*H than It Ain’t Half Hot Mum.
“The Irish Army are doing an amazing job out there,” O’Carroll said. “And a lot of times they don’t get enough credit for it. Actually, not enough credit at home – they do get credit in other countries. They’re doing something very serious that I want to write a comedy about, and the closet I can get to it is M*A*S*H.”
“I play the Commandant,” O’Carroll continued. “All the cast of the show [Mrs Brown’s Boys] are in it in different roles.
“The BBC have said, ‘Listen, let’s go straight to series’. And I said, ‘No, I’d like to make a pilot’. I want to make a pilot and just see how it pans out, how it looks.”
Explaining his insistence on a pilot episode, O’Carroll continued: “A) I don’t want to do something that isn’t what I meant it to be when I started. And B) I want to make sure we do something that makes the Irish Defence Forces very, very proud. If it doesn’t do that I don’t want to take the p*** out of anybody.”
“It should be good fun,” he added. “Hopefully we’re going to shoot the interiors in Glasgow and then the exteriors in Jordan.
“It’s set in the Eighties/Nineties. I’m using all Irish music – Johnny Logan and Dickie Rock and Sonny Knowles… And some Celtic rock from Horslips.”
O’Carroll said Lebanese Outpost “should be out in 2021”.
“The whole idea is, although we’re only doing a pilot, I have the BBC convinced to put up enough money to make the pilot ‘broadcastable’, which means they’ll want their money back, so we’ll go ahead with the series!”